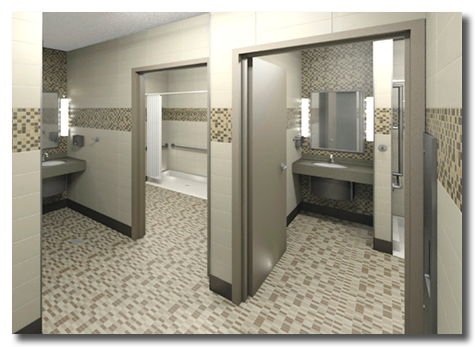 Carlisle Hall is one of three original dormitories constructed when the Husson campus moved from downtown Bangor to the site of the former Hillman Dairy Farm in the 1960’s. The identical residence halls served the University for many years, and despite the numerous past renovations, the restrooms remained much the same as when built. The University decided to initiate a plan to renovate the restrooms in the three buildings over a three-year period.

Each building had a center core with three wings; each wing housing three floors with one half-floor intervals between. The men’s and women’s rooms were stacked above each other for a total of nine restroom cores. The new plan involved creating four individual, private restrooms per floor, replacing the existing gang-style restrooms. WBRC Architects/Engineers of Bangor were commissioned to work with Husson to develop a conceptual design, working around the existing constraints of the structural elements and utility infrastructure. The design solution: a common core with access to the four private restrooms, each housing toilets, and shower facilities.

An RFP was drafted, and the concept was put out to a design/build competition. The successful team would be responsible for completing the detailed design and performing the renovations during the summer break, completing the project for the incoming fall students.

Renovations required the existing restroom cores be demolished, and due to the age of the structure, asbestos abatement was required during this demolition. The construction window proved to be challenging; not only given the amount of work needed, but humid summer weather made for a challenging installation of the tiled floors and walls. Temporary air conditioning of the workspaces helped the construction to proceed on schedule.