“We could not have completed this project without Rick’s persistence, guidance and tenacity. I personally appreciate his commitment with keeping the construction of this project on track. With Rick’s professional guidance, we were able to build a new Police Station that is not only built to need, but came in under budget as needed. Rick impressed all who were involved given his commitment to the end. Rick and his team helped the Town of Oakland take a giant step forward.” 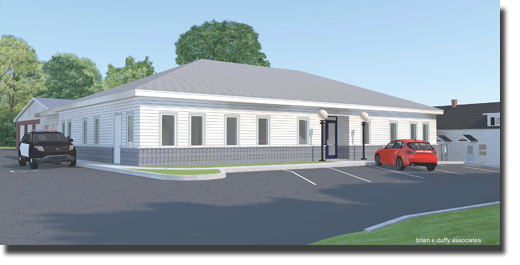 The Town of Oakland commissioned a Building Evaluation Committee in May of 2015 to assess the municipal facilities and the Committee quickly focused on the Police Station as the most deficient facility. The existing Police Station, built as a residence in the early 1900's, had many deficiencies and after looking at at number of alternatives the Committee concluded that a new facility was the best and most cost effective solution.

The Town of Oakland hired Brian E. Duffy Associates of Falmouth, ME as the architect and utilized the services of Snowden Consulting Engineers of Oakland to perform the site design. Utilizing the conceptual architectural plans and the site plan, a budget was developed for the entire project at $1,050,000 and the voters overwhelmingly approved a referendum at the November elections that endorsed the project.

The new 4,750 sf facility that sits on the footprint of the existing building, is designed to provide a safer and more efficient work environment for the police department.  The main entrance lobby with an adjacent conference room is monitored by the dispatcher who oversees controlled access to the police officers' work spaces, offices and locker rooms.  A two bay sally port provides direct access to the booking area with a dedicated bathroom and two seperate interview rooms.  A large training room with A/V presentation capabilities will also function as the Town Council chambers and be available for use by the community.

The building is a single story, wood framed, hipped roof structure, with architectural shingled roofs, cement clapboard siding, cellular PVC trims and a masonry wainscot providing a maintenance-free exterior. The building, designed to meet the current energy code, has a well insulated envelop, high efficiency heating/cooling systems and state of the art LED lighting with automated lighting controls.  The interior finishes were selected to be functional, but the originally budgeted flooring selections were upgraded during construction to materials that have lower maintenance and life cycle costs.

The Town of Oakland Public Works Department performed all of the site work for the project at a considerable savings to the Town.  The site scope included demolition of the existing building, foundation excavation, utilities, site grading, storm drainage, granite curbing and landscaping.

The project broke ground mid-April 2016 and it was substantially complete the end of August with the project costs considerably under the Town's budget.